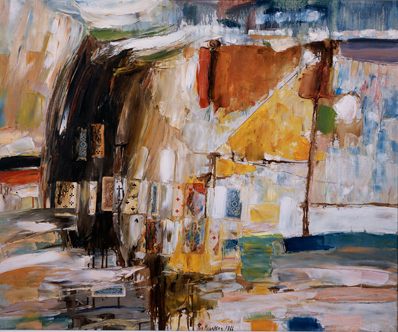 Elementary Russian is an intensive introductory course in spoken and written contemporary standard Russian, intended for students with no prior experience in the langauge. It develops proficiency in all four skills: speaking, reading, listening, and writing, as well as the basics of Russian grammar. It also introduces students to Russian life, history, geography, and traditions through authentic target-langauge texts, websites, various media, and other supplementary materials. It is highly recommended that students taking 102 also enroll in First Year Russian Language Lab.

This 1-credit course supplements work in the regular 860:102 or 860:107 course. It utilizes the audiovisual and digital capabilities of the Language Lab on College Avenue. Work on pronunciation, intonation, and comprehension. It is highly recommended that all students in 102 take this course.

Intermediate Russian is an intensive intermediate course in spoken and written contemporary standard Russian, intended for students who have completed Russian 102 or placed into the course by exam. This course is not for students who have completed Russian 107 or those who speak Russian at home with their family. The course develops proficiency in all four skills: speaking, reading, listening, and writing. It includes a review and expansion of Russian grammar and vocabulary. It deepens students' understanding of Russian life, culture, history, geography, and traditions through authentic target-language texts, websites, media (including films and music) and other supplementary materials. It is highly recommended that students taking 202 also enroll in Second Year Russian Language Lab. Fulfills SAS core goal AH q.

This 1-credit course supplements work in the regular 860:202 or 860:208 courses. It utilizes the audiovisual and digital capabilities of the Language Lab on College Avenue. Work on pronunciation, intonation, and comprehension. It is highly recommended that all 860:202 and 860:208 students take this course.

This section is for students who have some prior knowledge of Russian from home. It is highly recommended that students taking 208 also enroll in Second Year Russian Language Lab. Fulfills SAS core goal AH q.

This is an advanced course in spoken and written contemporary standard Russian, intended for students who have completed the equivalent of four semesters of college-level Russian, or have placed into the course by exam. The course strengthens grammatical control and develops proficiency in speaking, reading, listening, and writing. Students will learn to summarize, develop narration, and create connected paragraphys in speech and writing. They will also study complex grammatical structures, such as participles and gerunds, and syntactic constructions, such as subordination. They will broaden their vocabulary through the study of word-formation. This course covers many elements of modern Russian life, such as education, employment, leisure and youth culture, through authentic target-language texts, websites, media (including films and music) and other materials.

Taught primarily in Russian, the course fosters advanced language skills of conversational fluency, listening comprehension, writing and composition, expanded vocabulary, recognition of stylistic registers, and advanced syntax. These skills are practices while engaging with current events in mass media, and Russian culture as depicted in film.

The works of Russian novelist Fyodor Dostoevsky (1821-1881) proved eerily prophetic of twentieth-century developments: they intuited major trends in existentialist philosophy, provided uncanny insights into the terrorist mind, and predicted the rise of totalitarianism. Vitally, many of these insights stemmed from Dostoevsky's fear of a world without God—a notion that he rejected on moral grounds, but which he could not help representing (and giving unwitting credence to) in his fiction. His macabre and comic but ultimately deeply felt works probed the minds of criminals, murderers, and other unsavory individuals, juxtaposing them to pious prostitutes and Christlike children. By mixing philosophical queries and lurid subject matter, Dostoevsky shattered inherited notions of what the novel form could say and do, and became one ofthe most influential writers of modern times. This course will consider some of his most important works, including the novels Crime and Punishment and The Idiot and the novella Notes from Underground. We will examine them with an eye towards their insights into human psychology, religious and ethical polemics, origins in nineteenth-century Russian life, and relevance for twenty-first-century society. Fulfills SAS core goals AH o, p.

The ongoing conflict between Russia and Ukraine is reconfiguring global international relations. How to make sense of Russia's motives and political positions? What are their cultural and historic roots? Are we witnessing a revival of old imperial traditions? Or did the collapse of the Soviet Union create a fundamentally different background for current conflicts? How have Russians navigated their course between nation and empire, East and West? And how have they conceived of other ethnic groups within the tsarist empire and the Soviet Union? The central focus will be on cultural representations of empire in literature, painting, and film. These will be brought into conversation with readings in history, political science, and postcolonial theory. The course will include a visit to the Zimmerli Museum and a film series "Empire on the Post-Soviet Screen." All readings, films, and class discussions in English. No prerequisites. Fulfills SAS core goal 21C b.

This course surveys the impressive body of Russian and Soviet cinema, from its pre-Revolutionary roots to its contemporary circumstances. We will watch and analyze the films of Sergei Eisenstein, Dziga Vertov, Andrei Tarkovsky, and a variety of other directors from Russia and various former Soviet republics, including Ukraine, Georgia, and Armenia. This course will engage recurrent thematic concerns of Russian cinema (inter/nationalism, gender and sexuality, the aesthetics of violence) alongside formal ones (the development of montage, the advent of sound film, non-narrative cinema techniques). It will serve as an introduction to both cinema studies and Russian studies.

Elementary Polish is an introductory course intended for students with no or minimal prior experience in the language. Students will learn the Polish sound and spelling system. They will develop proficiency in listening, reading, speaking, and writing. The basics of grammar and core vocabulary are introduced. In addition, the course provides an introduction to Polish culture, including geography, history, literature, and practices through authentic texts, maps, websites, and other supplementary materials.

Intermediate Polish is intended for students who have completed Elementary Polish or have placed into the course. Students will continue to develop proficiency in four skills: listening, reading, speaking, and writing. Orthography drills reinforce the sound and spelling system. This course will broaden students' grammatical understanding and vocabulary. Students will read authentic literary texts, view a Polish film, and discuss current events in Poland, which will deepen students' knowledge of Polish history and culture. Fulfills SAS core goal AH q.

The ongoing conflict in eastern Ukraine, preceded by a wave of public protests and civil unrest during the Euromaidan Revolution of 2014, highlighted for Ukrainians the question of their identity as never before. This course examines how the dilemmas of Ukrainian identity became formulated in the literature of the first two decades of Ukraine’s independence.  We will pay special attention to social and cultural shifts that followed the fall of the Soviet empire. We will also ask how various identities—national, linguistic, ethnic, territorial, religious—are reflected in literary works of some of the most representative authors in post-independence Ukraine and how these identities interact in society at large. Readings include a selection from the writings of Oksana Zabuzhko, Solomiia Pavlychko, Yuri Andrukhovych, Andrey Kurkov, and Serhii Zhadan, among others.